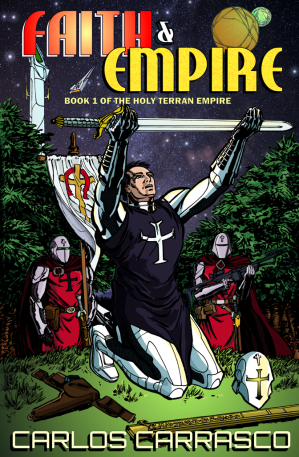 The Tale Begins With  Chapter – 1

Buoyed by the respite from enemy fire, we made short work of reorganizing for the climb up the crater wall. We ascended in three columns. It was rough going at first, but the higher we went, the firmer the ground grew under our boots. The Mechs were forced to wait for the returning Halberds to pull them out of the silt. It was just as well, because the small ledge that remained of the defile might have collapsed under their great weight. On the climb, we listened to Colonel L’Amour trade notes with Captain Obey and Lords Zoltan and Kolchic.

The numbers they traded were harshly sobering.

As we trudged up the last steep stretch of slope, our HUDs were fed the details of the enemy’s compound from the ground penetrating scans of the grounded El Cid. The base consists of a ten-story, fifteen hundred meter wide cylindrical shaft. There was a kilometer and change of twisting tunnels to wind our way through before we reached the base proper from our end. Fortunately the sensors did not pick up any signs of Ore Wyrms in the vicinity.

The scans also exposed a five-hundred meter wide bowl-like structure buried deep under the crater. It was, in fact, a hollow sphere with the top half split and retracted alongside the bottom hemisphere. The bowl was undoubtedly the pen from which the wyrms were loosed on us.

Squad by squad, what remained of C Company climbed over the crater’s rim and gathered on one side of the five meter square, steel doors of the outer airlock. Lord Kolchic and his men gathered on the other side.

The old mining base wherein the pirates hid was enveloped by yet another energy shield used primarily to repel the Ore Wyrms. This inner shield was produced by man-tall, pyramid-shaped aether generators on either side of the airlock. The top-side entrance was also bracketed by a pair of pyramids. There would be other such generators buried underground to give the base full coverage, but these didn’t concern us. Taking out the four on the surface would be enough to burst the installation’s protective bubble and let us at the doors.

Izzy and 1st Platoon’s burner, Ludlum were given the honor of melting the pylons on our end. Two others did the same up top.

Once the last energy shield fell, El Cid’s scans were able to determine there were over nine hundred life signals scattered throughout the base, a good half of them concentrated in the three central decks.

Captain Obey alerted Colonel L’Amour, “We’re ready to burn through the outer doors on your signal.”

The colonel had a different idea. “Let’s first see if these rogues have had a change of heart to go with their change in circumstances,” L’Amour said. He opened up a channel to the base and we listened in. “This is Colonel Llewellyn L’Amour of the Knights of Saint James, Matamoros. In the name of God Almighty and by the command of His Most Benevolent, Imperial Majesty, Emperor Andreas VI, you are hereby ordered, one final time, to surrender to the mercies of God and Emperor.”

After a long pause, a harried, nearly breathless voice responded. “We have hostages. Lots of them. You’ll let us be, if you value their lives.”

“We do not negotiate with pirates,” the colonel answered. “Surrender at once!”

Our helmet computers informed us that the pirate’s voice was not a match for Lugo Grogorum, but for a Sven Krogstadt who had nearly thirty outstanding warrants across half a dozen systems for larceny, kidnapping, assault, rape and half-a-dozen murder charges.

“We’re a sovereign power, we are! You have no authority here, knight,” Krogstadt continued. “You’re trespassing on Free Alliance territory. Don’t enter the base or… or we’ll kill the hostages, we will!”

“If a single hostage is harmed, then by Imperial law, you will all be subject to summary execution.”

“This is Imperial aggression!”

“If you want to live, you better be certain that we find the hostages unharmed and all of you on the ground, face down with your hands behind your head.”

“Anyone with a weapon in their hands will be shot on sight,” the colonel continued. “If you survive the coming assault, and I find that a single hostage has been harmed, I will personally strip you to your skivvies and eject you out onto the planet’s surface.”

“You are lawless criminals who have never had any right to sovereignty over any of the planets you have subjugated. Additionally, by your wicked and lawless actions, your general villany and most recent crimes against humanity and His Benevolent Emperor’s loyal subjects, you have all relenquished any right to personal autonomy.”

“You don’t have the right to impose…”

“Prepare, your wretched souls, to choose between a life sentence on a penance colony with its chance at salvation or certain death and eternal torment in the fires of Hell.”

“I warned you, we have hostages…”

The pirate’s spokesman was interrupted by the frantic voices of some of his fellows urging surrender. A short, curse-laced argument ensued which erupted into an exchange weapons fire and terrified screams until, as suddenly as the commotion began, it ended.

After an uneasy spell of silence, a new voice, equally breathless, stammered over the line, “We give up! We surrender! The hostages are safe. They’re safe. I mean… one was shot in the leg… but it was not on purpose… an accident, that’s all it was. She’ll be okay, I think… I… I hope… we… we’re taking care of her…” Our computers had no match for the new voice.  “So… so everyone, lay down your weapons… we surrender… And you, open the doors, you idiots! No… no, not you, sir knights… I wasn’t calling you… I was talking to…to my idiots…Open them now or I’ll shoot you too!”

The meter-thick steel doors opened slowly, retracting into the rock wall. Our last surviving rover darted through the opening as soon as it was wide enough. Behind the door was a massive cave dimly lit by overhead lights. Inside, the remnants of a half dozen fighters in various stages of disrepair lay amidst all manner of long-corroded industrial debris. Our remaining rover led us through the junkyard. It stopped in its tracks twice, alerting us to the presence of two booby-trapped piles of scrap metal. We made our way around them carefully and continued forward.

Over the length of a couple hundred meters, the cave tapered down to a roughly five meter wide tunnel which elbowed out at different points in various directions. The side tunnels were grooved with what the computers identified as the distinctive boring whorls of Ore Wyrms. This stretch of tunnel was free of debris, but here and there abandoned along the walls we passed eight haphazardly parked land skimmers.

Eventually, the main tunnel terminated in another massive airlock door which began opening as soon as we caught sight of it. Behind the door was an empty chamber. It was just as wide as the tunnel behind us but only ten meters deep and three meters tall. The door at the far end didn’t open. The one behind us started to close.

“Don’t nobody of you knights get nervous or nothing,” the new pirate leader said hurriedly over our commlinks. “We got to vent the outside atmosphere before we can open the inner doors.”

The rear doors finished closing with a metallic bang. The chamber then seemed to let out a long sigh. The inner door opened into a smooth, well-lit tunnel that tapered across ten meters to a narrow, three meters wide corridor, There was another airlock door at its end, half the size of the outer doors. It opened as we approached. The rover darted on ahead of us. The small recon robot crossed the threshold and gave us the All Clear. We followed. Past the doorway, we stepped into the bowl-end of a twenty five meter wide half circle of a chamber. Its walls were lined with lockers and shelves which were empty but for a few torn EVA suits, a cracked helmet, a few rusted tools and some scraps of circuit boards and weathered hoses. A two panel door was centered on the far wall. The rover detected forty-four life signatures on the other side.

Captain Obey had two dozen of us form two firing lines in front of the split doors. I was part of the first line. We were down on one knee, HAW-3Ks raised and on full auto. The second line was in position to fire over our heads. The rest of the troops spread themselves along the walls on either side of the doors.

Captain Obey slapped a large, chrome tile on the wall and the doors parted with a hiss. Beyond them a score of the pirates were immediately visible, face down on the deck with their hands behind their heads.

Some of them cried out, “Don’t shoot!” and others, “We surrender!”

A mix of disgust and righteous anger rose up inside of me at the sight of them sprawled out on the deck and begging for their lives. I thought of the King Alfred, the Torquemada and the other ships lost. I thought of the many men who died alongside of me, lost to the wyrms and to the pirates’ remote controlled mechanized proxies. So many dead, I thought and, God forgive me, but I was sorely tempted to gun them down where they lay regardless of the colonel’s promise of clemency.

I made a mental note to confess my murderous desire before next partaking of the Blessed Sacrament.

The rover rolled past the doors and swept the room with its small, swivel-mounted camera. The room was the other half of the circle with a single, narrower door centered on the far curved wall. The other score and change of pirates were quickly accounted for, also lying prone and submissive. Captain Obey led a squad of marines past the doorway. When he declared the room secured, we joined him. It took only a few minutes to bind the prisoners and sit them in a tight cluster. A brief interrogation failed to provide us with any useful information on the whereabouts of their leader.

Tune In Monday For The Next Chapter!

If You Are Enjoying This Story, Please Consider Purchasing My First Novel: