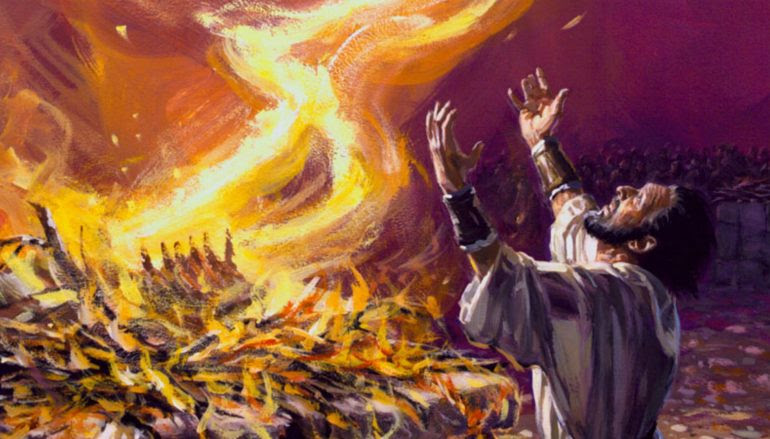 We began our Advent “preparatory” journey with Christ’s command to “Stay Awake!” My brothers and sisters, WE ARE AT A CROSSROADS!! This is not unlike the crossroads Israel faced in 1 Kings 18, where we see that they had lost their awe of God. To them, He was a million miles away. They still claimed to follow Jehovah, but He was no longer a part of their daily lives. God knew that only a vivid reminder of His power would awaken these people from their spiritual sleep. So God used Elijah to bring about a turning point in their lives. With the odds stacked against him-one man standing against hundreds of pagan leaders-Elijah showed the strength of God.

Our own spiritual slumber, in our times, has opened the way for Satan to advance with his evil agenda. The defining moment came on January 22, 1973, while catching us in this slothful indolence, our nation sanctioned the murder of innocent and precious little babies. The thing about abortion is this: the ancient practice of child sacrifice has resumed in earnest with abortion on demand—only now it’s all hidden from our eyes. The babies are no longer sacrificed on the altars of the ancient gods Moloch and Baal. Instead, they are sacrificed on the altars of convenience or material benefits.

It is uncanny how much this moment in history resembles the conflict between Elijah and Jezebel; between the power of God and the satanic lie of Baal. Are we under the demonic influence of Jezebel?

Other ways a Jezebel spirit can gain power of a nation …

Is any of this sounding familiar? It should. This almost perfectly describes the Motus Operandi of most of the liberal secular ruling class in power today.

And so, while we slept, Satan has advanced. Every major institution has been captured by the radical secular left. The media, Hollywood, TV, universities, public schools, theater, the arts, literature – they relentlessly promote the false gods of sexual hedonism and radical individualism. Conservatives have ceded the culture to the enemy. Tens of millions of unborn babies have been slaughtered; illegitimacy rates have soared; divorce has skyrocketed; pornography is rampant; drug use has exploded; sexually transmitted diseases such as AIDS have killed millions; birth control is a way of life; sex outside of wedlock has become the norm; countless children have been permanently damaged – their innocence lost forever – because of the proliferation of broken homes; and sodomy and homosexuality are celebrated openly. America has become the new Babylon.

This day I call the heavens and the earth as witnesses against you that I have set before you life and death, blessings and curses. Now choose life, so that you and your children may live (Deut. 30:19).

Will our December 6 “Worldwide Exorcism” be our “Elijah Moment”? All I know is that we simply MUST awaken from our spiritual sleep and restore our awe of God! I will cry out until my dying day … “When it comes to evangelization, we don’t need more programs and talking points and DVDS and books and pamphlets … WE. NEED. TO. RESTORE. AWE. OF. GOD!! Please, God! Help us!!”

I don’t know if God will respond to our December 6 prayer with some miraculous event, but I know my prayer will be that God lead us, somehow, to a turning point that recovers our “AWE OF GOD.”

You can read the original article about the December 6 day of prayer and fasting from the National Catholic Register here: Four Exorcists Urge Day of Fasting, Prayer and Reparation Dec. 6

Reprinted in full from Father Richard Heilman at  The Holy League.