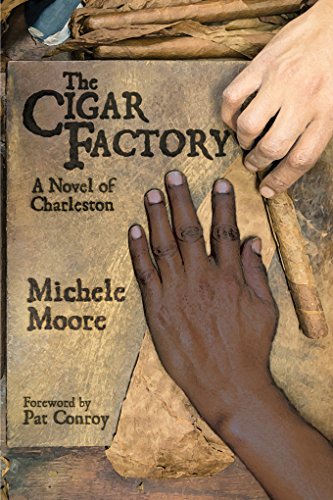 I love Charleston, S.C. It is a beautiful city with some of the best food in the country and I say that as someone who enjoyed the picturesque and tasty treats of New Orleans for fifteen years. Regrettably, even though I live only an hour from Charleston, I don’t get to visit the Holy City as often as I would like. This in part is why I so enjoyed Michele Moore’s  THE CIGAR FACTORY. The novel took me to Charleston. Albeit, it was a tour of the city’s yesteryears and a merely literary one at that, but it was still a lovely visit.

The virtual trip to Charleston was only a small part of the enjoyment, however. The bulk of it was Moore’s lovely writing which was at the same time, economic and effective. I thought it quite impressive for her first novel. Moore’s prose had the effortless feel of an accomplished writer long experienced at wordsmithing.

The novel begins at the advent of the twentieth century and runs through the end of the Second World War. There are two tales that start off worlds apart but eventually twine about each other making a simple, strong cord of a narrative. The P.O.V.’s for these stories are the matriarchs of two families, one white, the other black, and both poor and Catholic.

The women have more in common than either would imagine or believe despite spending countless hours day after day and year after year separated by no more than a few floors in the cigar factory that employs them. The segregated workplace and their own prejudices conspire to keep them strangers. Only the factory uniforms and the wretched ammonia-like stench that clings to them can make the women acknowledge each other at chance crossings in the market, on the streetcar or when one had to occasionally catch Mass at the other’s church.

Through their eyes we witness the dizzy reeling of the first half of the twentieth century, two world wars, a depression, factory automation and the rise of the labor unions which will reluctantly draw them out of their separate and equal far corners to stand together, united for each other’s sake. We watch the women get through the decades and their attendant heartaches, disappointments, deaths and disasters with dogged reliance on their faith, work ethic and love of family. Along the way we watch them grow from shy, unsure and healthy young women to strong and confidant matriarchs despite their weakened and compromised health due to the insalubrious effects of the years spent breathing in tobacco dust.

As a lover of the occasional stogie, I also appreciated the many tidbits about cigar making.

All in all, the novel made for a very satisfying read, though it did leave me with an incessant craving for a bowl of she crab soup!