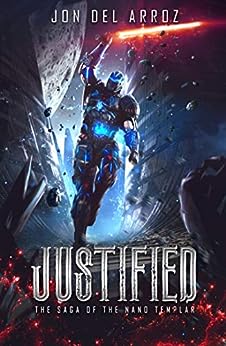 JUSTIFIED, a novel of star-faring Knights Templar waging an interstellar crusade was not one I could pass up. And for the most part, it was entertaining.

The book's crusade is backdrop to the story of Drin, a knight who suffers a crisis of faith so severe that he abandons his post and brother Templars. Fleeing the scene, however, lands Drin in circumstances dire enough to force him to rely on both the very faith he questions and the vocation he would rather walk away from. The conflicts internal and external made for, as I said, a mostly enjoyable read.

I say mostly because Drin wasn’t really a Knight Templar. Drin wasn’t a true Templar because he wasn’t a Christian. He was merely Christian-like, just like his enemies were kind of-sort of like Muslims. The use of analogies for the two faiths watered them down, making them indistinguishable from each other and thus weakening the work in my view. Projecting the two religions into the future, imagining new iterations for them might have garnered the story some genuine depth and given the characters that living, breathing third dimension which makes them memorable.

Still, it’s only the first book in the series, so I remain hopeful.

I received a free copy of this book via Booksprout and am voluntarily leaving a review.