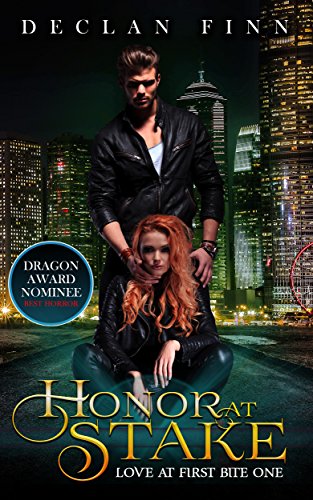 I wish writers would let monsters be monsters. Unfortunately, for some time now, there has been a growing trend to humanize them. It bothers me to no end because instead of adding texture or layers of depth, it generally reduces the monsters to something less… well, monstrous. And so, it was with some hesitancy that I took up Declan Finn’s  HONOR AT STAKE, the first installment of his Love at First Bite series.

I’m glad I did however. The action begins about a third of the way into the novel and steadily picks up momentum, propelling the reader to a climax that should convince him to continue the series. It certainly did for me. The action sequences are first-rate, written in sharp prose that readily paints a clear picture before the mind’s eye. Finn does it with an economy of words that many a writer would envy.

My first issue with the story is that while this book’s vampires certainly do not glitter, I did, at times, sense a dim nimbus about the ravishing red-head of the novel’s lead vampire, Amanda Colt. It was just enough to make my pet peeve snarl from time to time.

To the tale’s credit, vampirism is not a spiritual curse that one brings on oneself by cursing GOD or trafficking with the devil, but a physical condition contracted via a rare virus. Once the virus is contracted, one becomes evil by giving in to the lust for blood and feeding on your fellow man. Amanda Colt manages to stay off that path by daily communion, subsisting in part on the daily intake of the Precious Blood of Christ offered in the Mass. This and other clever playing with the genre’s long cherished tradition of infusing vampire lore with Catholicism kept the old peeve from going barking mad.

I had a harder time with the novel’s other hero the psychopath, Marco Catalano. Too often he came off as a Larry Lou or Gary Stu or whatever the name is for a male Mary Sue. Often, but not always, which would have been insufferable. There were hints of a character arc and potential for real development behind his know-it-all super competence.

All in all, Honor at Stake is a worthy read and deserving of its Dragon Award nomination.