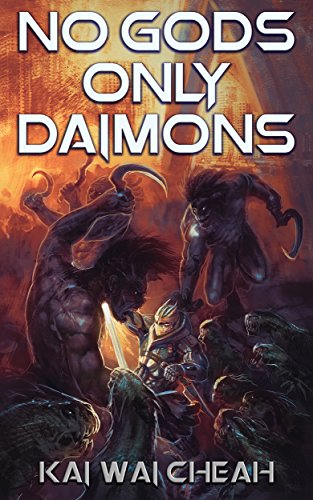 If Tom Clancy had decided to give one of his adrenaline-fueled thrillers an urban fantasy twist,  No Gods Only Daimons   by Kai Wai Cheah, would be exactly the kind of novel the master of military adventure would have created.

In this exciting debut novel, Dragon Award nominee Kai Wai Cheah does an excellent job of world-building an alternative Earth that is at once very familiar and utterly exotic. It is a world where the war on terror, the battle between the West and East is fought with more than mere bullets and bombs. There’s also nanotech and Psionics who can manipulate matter and energy.  And then there are the Ifreet, powerful Jinn regularly summoned to wreak unholy havoc! Angels and demons, or rather, eudaimons and kakodaimons, are also mixed into the fray via their human agents whom they enhance with various supernatural powers.

For the most part the story is told from the perspective of Luke Landon, a very talented and lethal special ops soldier who joined the war effort after suffering a tragic loss during a terrorist attack. Besides being an agent in an off the books anti-terror outfit for Hesperia (The world’s equivalent of the United States), Luke is also a Covenanter, an agent of a powerful otherworldly being named Hakem al-Dunya. It is a relationship Luke has entered into with many a misgivings, since to covenant with such a being is not only a capital offence in his homeland Hesperia, but it also haunts him with the fear that his zeal to save the world may have cost him his soul!

This is a fun, fast-paced read that should leave you eager to read the sequel.

One thought on “No Gods Only Daimons — A Book Recommendation”