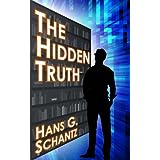 When a high school student stumbles across a discrepancy between an online version of an old physics book and its pulp original, he quite naturally assumes there was an error made in its scanning. Investigating further, he discovers other ‘discrepancies’ between old physics books and their online copies, discrepancies which are all related to a particular and peculiar theory of electromagnetism. The more he investigates the clearer it becomes to him that there exists a century-plus long conspiracy to erase all evidence of the intriguing, though counter-intuitive, theory. Before too long, the cabal notices the student’s nosing about and the young man learns how deadly serious the conspirators are about suppressing that bit of knowledge.

THE HIDDEN TRUTH by Hans G. Schantz   is, all at once, a cat and mouse, cloak and dagger and who-done-it of a thrilling thriller. It is a very original contribution to the genre. The writing is breezy. The characters are developed fully enough that you actually care what happens to them. Schantz’ depiction of family life was particularly engaging. The pacing was expertly done, kicking into high gear about halfway through the novel. The ending both satisfied and left me wanting more.The science in the tale was never overwhelming; it was intelligible enough, at any rate, for this layman to follow.

I recommend it heartily!

Look for it at the Conservative Libertarian Fiction Alliance.