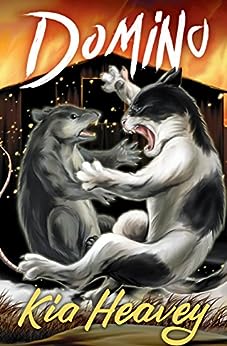 Ever since Aesop’s time, if not before then, storytellers have been spinning yarns about animals in order to make salient observations about humanity. These tales are among the most enduring and endearing stories we have. DOMINO By Kia Heavey is a more than deserving addition to their immortal ranks.

Domino can be fitted snugly between George Orwell’s Animal Farm and Richard Adam’s Watership Down, the two books more than a few reviewers have compared it to. Like Orwell’s and Adam’s classics, Domino is, first and foremost, an entertaining tale about fully fleshed (and furred) characters.

Kia Heavey really knows her animals, cats in particular, and her writing is sharp enough to comfortably place the reader in their skin. She accomplishes this with an attention to the details only the keen eye of an animal lover could detect and she reproduces them convincingly, as only a lover of language can. A dozen or so instances spring readily to mind, but I was particularly impressed by the exquisite intimacy generated during the scene in which two cats share a freshly killed squirrel.

Ostensibly, Domino is the story of a country cat trying to protect, not only his way of life, but ultimately his very life and the lives of his mate and their litter from the ramifications of “high-minded” ideas being preached by a recently transplanted city cat. This city cat, named Socrates, preaches ‘transcendence’, urging his fellow felines to ‘overcome their natures’ and ‘get along’ with all their fellow creatures, including, if not especially, the rats!

But of course, fables, as noted, are not really about the animals which inhabit them. They are about the ‘us’ who read, write and share them. Domino is thus a timely tale for this age of ours which peddles nonsense like gender theory as ‘science’ and bids us to find our hope in the cyber snake oil of transhumanism.

The book is so well written, the story so charmingly told, that Domino is as timeless a tale as it is timely.

I highly recommend it!

Domino and other great reads can be found at the  Conservative Libertarian Fiction Alliance.