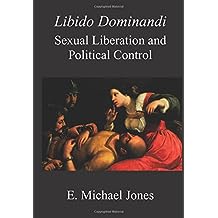 I cannot recommend THIS BOOK enough!

At 600+ pages Libido Dominandi: Sexual Liberation and Political Control is something of a tome but well worth the read. If it were not well written, the subject matter alone would be enough to lead one from first to last page. But the book is very well-written, the style engaging enough to carry the reader through the material briskly.

Libido Dominandi is essentially a history book. It is the history of an idea: sexual liberation as a means to power. ‘It is not a new idea,’ says its author, E. Michael Jones. ‘[The idea] lies at the heart of the story of Samson and Delilah. The idea that sin was a form of slavery is central to the writings of Saint Paul. Saint Augustine, in his magnum opus… divided the world into two cities, the City of God, which loves God to the extinction of self, and the City of Man, which loves self to the extinction of God. Augustine describes the City of Man as “lusting to dominate the world” but at the same time “itself dominated by its passion for dominion.” Libido Dominandi, [this] passion for dominion, then, is a paradoxical project, practiced invariably by people who are themselves in thrall to the same passions they incite in others to dominate them.

While Mr. Jones can see this idea playing out in the Samson and Delilah story and ancient Israel’s frequent falling for the orgiastic cults of its day, Libido Dominandi relates the story of this vicious idea’s modern history. He begins his detailed account of the sexual liberation movement’s ebb and flow throughout history with the suppression of the Jesuits in 1773 and traces its’ every twisted turn and monstrous morphing to the present day. It is an eye-opening, sobering and, at times, a shocking story of the most sordid souls and their endless quest to soil everything that is pure and good in this world.

Libido Dominandi puts the sexual scandals of the day into proper focus and into historical context. Ominously, reading this book, which was written way back in 2005, you are left with the feeling that the unraveling we are witnessing almost nightly on the news is but the shredding of the top layer, the veil if you would, which hides a deeper depravity yet to be revealed.