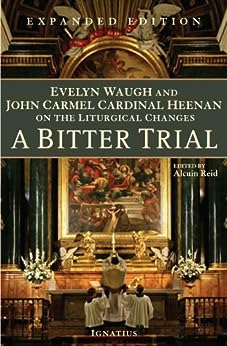 In this short but powerful book, one can really feel the anguish that the sweeping changes to the liturgy caused Evelyn Waugh. Through the various letters to Cardinal Heenan, friends and assorted editors, Waugh not only points out the various problems with the Novus Ordo – presciently calling to mind Pope Benedict XVI’s critique of the new Mass as often being banal & pedestrian – but he also confesses that the changes are a challenge to his faith, reducing Mass attendance from a holy obligation to a “tedious duty.”

Reading such a painful confession one can’t help but think of the alarming numbers of parishes, seminaries & convents that closed down as pews emptied in the wake of these changes, changes that were not called for by Vatican 2 but were rather wrought by what Waugh summed up as “a strange alliance of archeologists absorbed in their speculations on the rites of the second century and modernists who wish to give the Church the character of our own deplorable epoch…”

These two groups, spiritual heirs of the Vandals if ever there were any, in a misguided (to be charitable)attempt to simplify the liturgy, stripped it of much of its beauty, which in their Philistine arrogance they dismissed as ‘the accretions of centuries…’ And like the baby & the bathwater, much of the liturgy’s reverence was ejected with its beauty. In his most succinct and poignant complaint, which to me is the crux of the matter, Waugh wonders why “the Church [which] rejoices in the development of dogma; why does it not also admit the development of liturgy?”

I’m not a sedevacantist, Vatican 2 basher or a Latin Mass-or-bust sort of Catholic, but it is obvious to me that as legitimate as the Novus Ordo of the Mass is, it is not a development of the Tridentine liturgy. It is rather a jarring alteration of the older rubrics. The difference is so jarring that they seemed to be the products of two different religions to my pre-convert reckoning. Thus I very easily sympathized with the disorientation Waugh suffered at the sudden changes to the liturgy and could feel something of the heart wrenching concerns that compelled him to write to Cardinal Heenan repeatedly.

I enjoyed the book tremendously. Throughout it I kept thinking of this prophetic quote from Hans Urs von Balthasar:

“We no longer dare to believe in Beauty and we make of it a mere appearance in order to more easily dispose of it. Our situation today shows that Beauty demands for itself at least as much courage & decision as do Truth & Goodness, & she will not allow herself to be separated & banned from her two sisters without taking them along with herself in an act of mysterious vengeance. We can be sure that whoever sneers at her name as if she were an ornament of a bourgeois past – whether he admits it or not – can no longer pray & will soon no longer be able to love.”

I recently grieved with Waugh when I came across this video being recommended by a deacon in my google+ feed. What’s next, I asked the good deacon? A Mariachi Mass, complete with a blessed-host stuffed pinata?

At least they saved this nonsense for the end of the Mass. Thank goodness, otherwise the priest might have been tempted to throw out handfuls of the Blessed Hosts from the sanctuary like so many plastic doubloons from a parade float. That would have been a travesty on par with the abuses and outright blasphemies documented below:

Fortunately these extreme examples are becoming rarer, I’m told. I certainly hope so. Though in my few years in the Church, I have witnessed a Polka Mass and what I could only describe as a Captain and Tennille Mass. I couldn’t tell you which disturbed me more. I would have to think about it and I really don’t want to.